Like everything in guitar, and most things in life, we all stand on someone’s shoulders. No one really is inventing anything from scratch. Music, guitar pedals, amps – they all owe their existence to some sort of foundation of the past. Our latest pickup is a little like that – its ancestors are a Hofner 510 diamond logo and a DeArmond pickup. Say hello to the new Deacci Hofmond.

Whilst we produce our own range of custom pickups, Deacci also offer a vintage rewind service and it was this that led to a customer dropping in an old Hofner pickup that needed a fix. On first inspection it looked like a mini-humbucker. However on opening it up I found the internals were actually a single-coil pickup, so I contacted the owner to ask if anyone had previously rewound or worked on the pickup – or indeed to clarify if he had even ever heard it working during his ownership. He confirmed that to the best of his knowledge the pickup was all original and indeed that he had played it for some time. 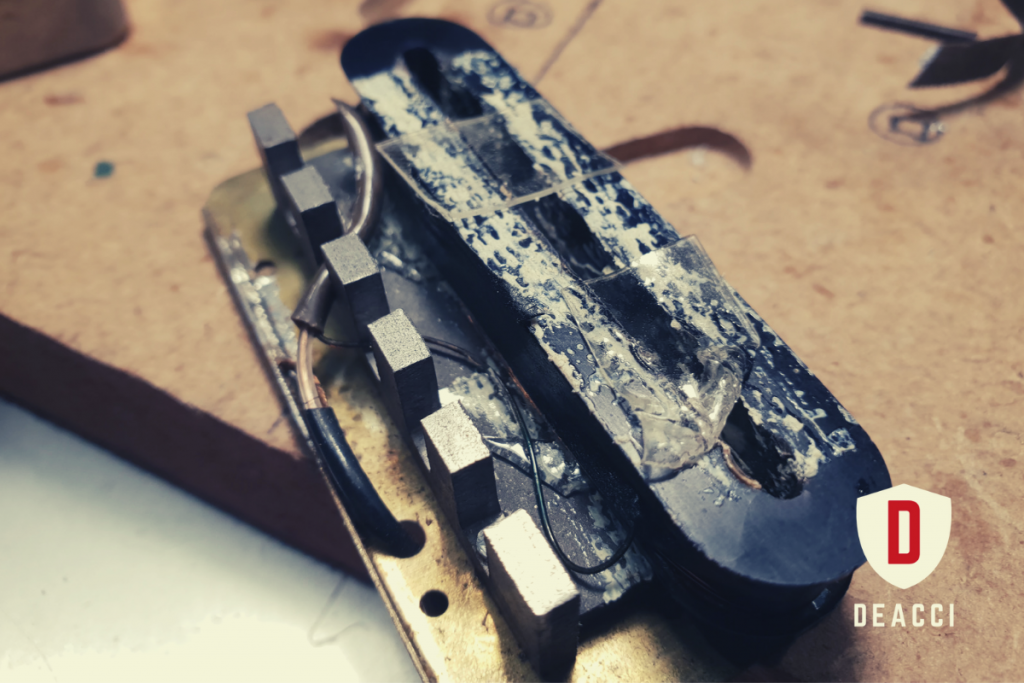 On the request of the owner I rewound it “as-is” and as is normal practise quickly tested it on the bench ahead of boxing it up and sending it back to the owner. As co-incidence would have it that week was the first time I had connected with Ariel Posen – having planned to record some playing of our then new Deacci Blackcat singlecoils. It’s always been part of our nature at Deacci to take feedback from other people’s ears and having a top-class international guitar player down the road is always a handy thing!

When Ariel came up to the workshop we blasted through some recording of the new ST and Blackhat single coils ,  FAT Juicy P90 and probably a few more . It was a crazy busy day. After our filming was done Ariel spotted the little Hofner mini-humbucker on the bench ready to go out. His curiosity got the better of him and before long he’d persuaded me to drop it in to the test mule guitar. It really had something. A definitely unique sound that really stood out. Would I have chosen to pursue it as a way forward for a new product if it hadn’t been for Ariel’s “pro ears”? At the time .. possibly not as I had a lot of projects on the go. Thanks to Ariel however I got a little push towards seeing if we could make a full-size humbucker of this design.

A short time before  Ariel’s visit I ended up with a set of Dearmond pickups on the bench. They were very unique with a sound that was completely different to any other humbucker I had heard before.  They belonged to a very well-known customer who’s guitar is probably one of the most famous in the world of music. None other than Eric Bell of Thin Lizzy. THAT Strat! He’d asked me to take a look at his pickups for him as a result of them being terribly microphonic and effectively unusable. Considering their pedigree, it was a mix of a golden opportunity and prudent to take not just a closer look at this older set of DeArmonds , but to measure them in detail so that in the event that their dip in the wax potting bath went south, I had as much data as possible to complete an accurate rewind. 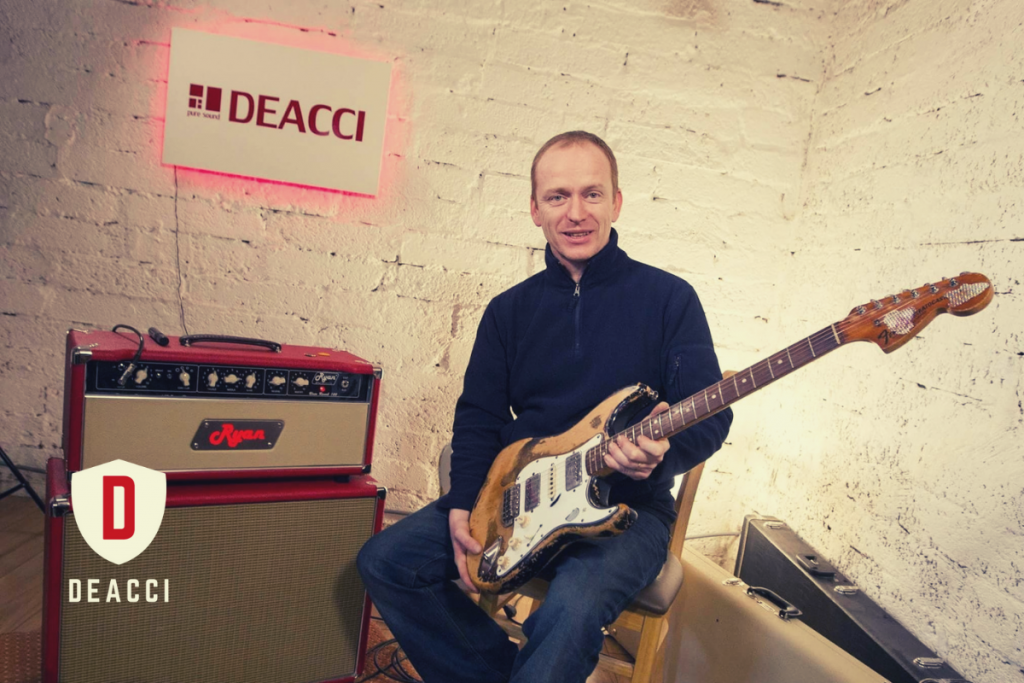 Declan gets the chance to work on Eric Bells iconic Strat .. a great opportunity for some R&D.

It wasn’t until Ariel has left that I picked up the test guitar with the Hofner pickup in it and realized that there was something about the feel of how it played which was connecting it to Eric Bells DeArmonds. I know he has been asked the question a number of times and while the mystery is still unproven, I am fairly sure that under the cover of Eric’s DeArmond humbucker cover, lies a single coil.

And so the project for this new pickup really started to take flight and the “Hofmond” was born.

I really wanted to create something that sounded like a mix of these two pickups – the flavor of an old “half wound” mini humbucker Hoffman and the iconic and unique Dearmond pickups from Eric’s Strat.

Designing and building a new pickup can be a real rabbit hole that you need to go down. It can take a very very long time to get out the other side. Sometimes you can feel that the job is done after you test wind two or three versions of the prototype – which is possibly the worst thing as it’s better to take a little more time to test and refine and find the limits.

Testing and prototyping pickups has always been a very intense process at Deacci. All of our pickups go through an extensive series of tests around both build and tone quality. With the Hofmond this process was even more “testing” and difficult on so many levels – even though arguably it’s one of the simplest pickups on paper.

It’s hard to describe the intricates of what has made it difficult- however, I think it comes down to how we as guitarists process our opinion of tone. Let’s assume a fictional character who for the purposes of this article we will refer to as “Mr Tonehead.”  Mr Tonehead can play guitar in so many rooms, a large gig venue, his front room, a practice room in a warehouse or even a bedroom – all of which will react differently. So I asked myself the golden question – Where does tone come from? Is it all in the fingers as the cliché states? I don’t think so.

The question for me has always been what impact do the guitar pickups have on Mr Toneheads thinking of tone? If we look at it all scientifically inspecting levels and frequency response etc you’ll certainly get “data” – but does it really mean anything to us as guitarists? The other side of the coin is the more creative approach – what am I hearing with my ears? How do these pickups make me “feel” as I play? Your ears, after all, are a key measuring tool to what’s around you.

After spending more time on this journey with a bigger foot in the scientific side of this exploration of tone I’ve learnt a great deal about the data behind what impacts tone. I’ve come to realize however that the difficulty is that as guitarists we all fall into one of these two camps – you’re a science head or a creative head.

Our aim at Deacci is to inspire all guitarists by the tone of our pickups – regardless of the “room” or scenario that you play in. The mix of science and creativity have driven the development of new products like the Hofmond pickup.

So the big question is when will they be on sale?

We’ve a last batch of testing to do with some vintage Les Paul’s and PRS guitars .. More of which we hope to share with you over the next couple of weeks – as well as some demo’s of the pickups in a number of guitars. All things considered the first limited edition batch should be ready for dispatch mid-August.