Deacci Vintage humbucking pickups make it into all sorts of guitars from the cheap and cheerful to one-off luthier builds. Even Gibson’s own custom shop Reissues regularly get our pickups as an upgrade, but to our knowledge, this is their first time in a real 1959 Les Paul. Customer email below in its entirety.

Hi Declan, Thank you for your reply. The pickups arrived safe and sound last week and I installed them into my ’59 Gibson Les Paul. I had been running original PAF’s in it for over 25 years and really wanted a cosmetic change to double creams, but nothing I heard matched the originals. My friend, Joel lent me a set of Deacci Ones he had ordered previously and I knew I had to have a set. I took them to the gig last week and they didn’t disappoint, in fact they seemed to have a little more clarity when I needed it and smooth, full overdrive when I wanted it going through a Hughes & Kettner all-valve rig To say I am impressed is an understatement. The PAF’s are now in an old Tokai Les Paul. Viva Deacci I have attached a pic of the Gibbo with the Deaccis in them for your enjoyment. Regards Peter

With an email like that I had to follow that up with a few questions about the guitar, so instead of me paraphrasing, here is a little more background to the 59 with some photos from Peter which he has kindly allowed me to share.

Hi Declan, In regards to the guitar, it is a ’59 body and neck that needed major restoration when I bought it 26 years ago. All the hardware and electronics were gone and the lacquer was totally ruined. I bought a pair of 1961 SG/LP PAFS from a mate, had the colour and finish re-done, bought whatever hardware was closest to original and over the years tried to keep it looking as original as possible. Pots are vintage 500k CTS with Russian PIO 0.010 uf Capacitors to give it a little more brightness instead of the regular 0.022uf caps used by Gibson. So it’s not totally original at all. I’ve got 4 Les Pauls and 4 Strats (mainly old Tokai Springy Sound) and many friends have ’59 RI Gibsons with spectacular tops – much nicer than mine – on them but this one seems to out-sustain them all. The flame is only visible from certain angles and at other angles, it looks like a plain top. It does not command the massive dollars of totally original ’59s but I’m really all over that fuss. It will eventually be an heirloom to my grand-daughter. Peter 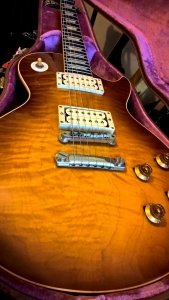 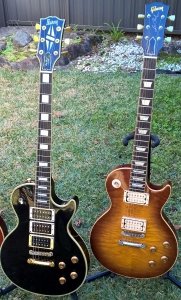 Lucky grand-daughter !! Enjoy the pickups in that wonderful old guitar Peter and thanks for your feedback and allowing me to share it.