Developed with and for Dublin based virtuoso Mal OBrien, the name Mobster seemed about right for this set of high output Telecaster Pickups. Roll back the volume on this set and they become almost charming, however  you always know there is something more sinister under the hood. Mal describes these as a

“Nicest front pickup I have ever heard on  a Tele especially when it’s dirty. It has so much body and beef, really buttery and creamy sound. The Bridge is  big fat and warm sounding great mid range super for country and rock ‘n’ roll it’s kind of the wolf in sheep’s clothing though as it could also take your head clean off your shoulders”

Mal’s tone was heavily influenced by players like Gary Moore , Joe Satriani and Alan holdsworth, so it’s no surprise that he likes high output. I spent an afternoon with Mal listening to the tones he gets from his guitars and many of them are equipped with hot rodded or high output noiseless. I believe the only exception to this rule was his Gibson 335.

Mal wanted a bridge pickup that could , “Take the head clean off your shoulders” , or in other words it had to have enough treble bite.  The Mobster bridge is a 16k single coil with a matching neck pickup that has an open cover. Tele necks can sound dark, an open cover reduces the loss of high frequencies and is a necessity for pickups in this output range.

Mal is currently working on a new Album. He is keeping quite tight lipped about it, but I can tell you that it is going to be bluesy and Mal will be performing much of the vocal. Our next challenge is to equip one of Mals strats with some single coils. 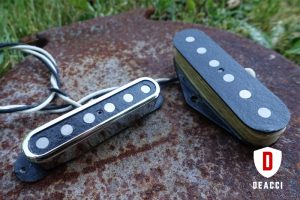 An increasing number of players are moving away from noiseless pickups for the simple reason they are not “that tone”, whether its Strat or a Tele  or any other noiseless single coil design, many players are returning to single coils. While the cost is a little extra noise, there is no mistaking the character of a true single coil pickups.

For more info check out